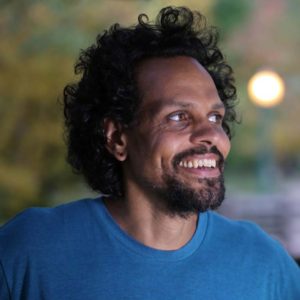 A few years ago a respected writer familiar with my work urged me to coin a phrase for what I do.  I asked him for a suggestion.  He said, “indirect narrative.”  I thought about it for a couple of years, modifying his idea and words to come up with “organic narrative,” meaning that my narratives grow out of my findings in archives and oral histories like limbs on a tree or bush.  But that term never felt totally right, either.  We settled on “wide-angle view” for the subtitle of Gene Smith’s Sink, a phrase coming from an interview with Adam Phillips in which he quoted the psychoanalyst Marion Milner talking about the importance of looking around a subject rather than directly at it.  The phrase is appropriate for Gene Smith’s Sink, but not really right for everything I do.

A few days ago the poet Ross Gay, who won a 2015 National Book Critics Circle Award for his collection of poems, “Catalog of Unabashed Gratitude,” wrote about Gene Smith’s Sink using a phrase, “lyric research,” that may get closer to my overall process than anything I’ve considered so far.  His words help me think about my almost-finished next manuscript, which has nothing to do with Gene Smith at all.  Here’s what he wrote:

Among the things I love about Sam Stephenson’s book Gene Smith’s Sink is that it’s the result of, and an artifact of, lyric research: research that ostensibly originates with a given subject or archive, but very quickly follows leads elsewhere.  It’s a sort of wandering and associative research, and in this way has as much to do with poetry as it does “documentary” or “nonfiction.”  Lyric research reminds us that the researcher, the writer, the speaker, is also the subject. But maybe more to the point when speaking about Stephenson’s beautiful book, lyric research is a capacious mode of seeing, which seems appropriate, given the book’s occasion is the photographer Gene Smith.  Given the book’s subject, ultimately, is looking.